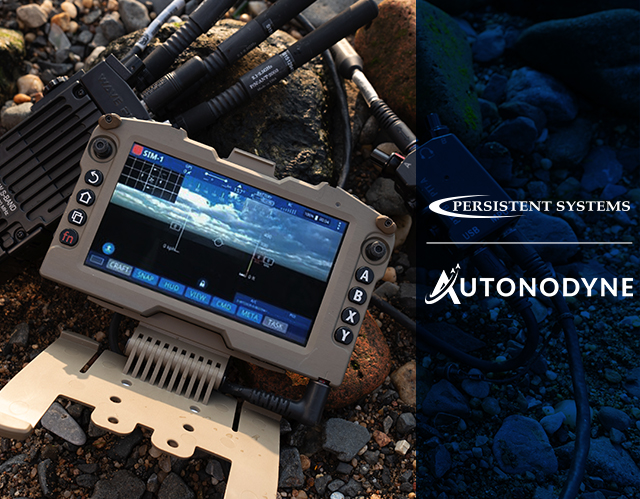 In November 2020, engineers from Autonodyne, a Boston-based AI engineering firm, installed their RCU-1000 Android™-based UAS control software on Persistent’s MPU5 tactical networking device. The MPU5 provided the datalink to the primary UAS and the Android computer to run Autonodyne’s software. The RDC was the user interface (touch screen, joysticks, buttons) to control the flight of an American-made UAS over a field in Massachusetts.

“The team at Autonodyne were able to load their unmanned common control station software on to the MPU5 and run it without any issues,” said Adrien Robenhymer, VP of Business Development for Persistent Systems. “Likewise, the UAV pilot found the RDC to enable precise control of the platform. They had full touchscreen, joystick, and button functionality.”

The MPU5 seamlessly connects people, sensors, and vehicles (both manned and unmanned) in a robust, self-healing mobile ad hoc network of voice, text, video, GPS location and sensor data—all without the need for external communications infrastructure, and all on the move. It also hosts and runs Android applications, as in the case of Autonodyne’s RCU-1000.

“The vehicle utilizing the MPU5 vastly outperformed the other UAS and datalinks included in the multi-vehicle test. We experienced nearly lossless connection to the MPU5 at extended ranges that other datalinks could not sustain,” said Nate Titus, Director of Government Programs for Autonodyne.

Autonodyne, meanwhile, is one of 13 companies that were collectively awarded, in July and September, an indefinite delivery/indefinite quantity U.S. Air Force contract worth up to $400 million for solutions in support of the service’s Skyborg program, which aims to build a family of expendable, low-cost UAS.

“It is always exciting to collaborate with other players in the UAS sphere,” Robenhymer said.