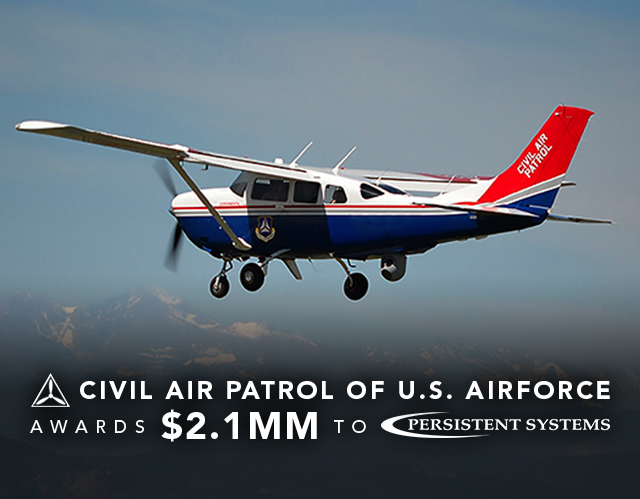 The contract follows multiple earlier ones that included AERONet equipment for five aircraft, three dismounted units, one vehicle and one tactical operations center, along with spares.

“With AERONet, Civil Air Patrol will be able to conduct disaster relief and emergency aid missions far more effectively,” said Adrien Robenhymer, Persistent’s VP of Business Development for Air Force and Intelligence Community Programs. “Teams that otherwise would have had to operate in isolation can now connect back to a tactical operations center and be guided by medical professionals.”

Separate AERONet enclaves can also be federated at a regional hub, so different organizations can better coordinate their activities and avoid working at cross-purposes, Robenhymer added.

“When the tactical operations center and deployed ground teams are not in range of each other, they can relay their communication through the AERONet equipment on the airplane,” Pagliere said. “This enables their communication to extend across long distances, over terrain and around obstructions.”

Persistent Systems successfully conducted an AERONet demonstration in August linking an aircraft to a tactical operations center and a beyond-line-sight unit on the ground. The link delivered a live video feed to simulate how medical doctors could provide remote assistance from anywhere in the world. The demonstration proved that robust network connectivity could save lives during a disaster relief effort.

“Following that, we completed our first AERONet integration with an international customer,” Robenhymer said, “and we are already supporting multiple domestic and international implementations of this capability.”