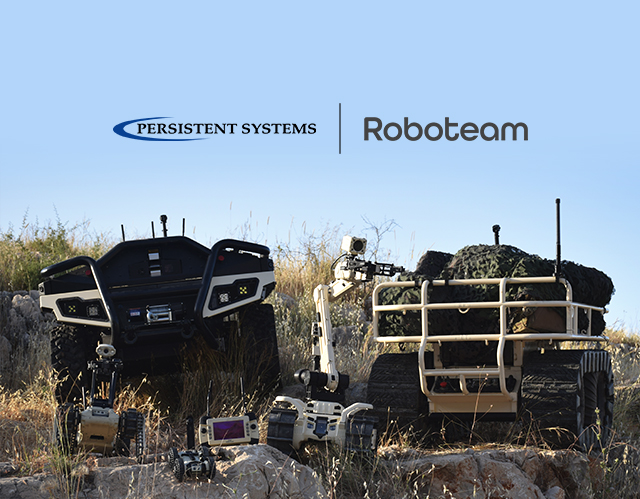 “We are happy to see Roboteam formally join the Wave Relay® Ecosystem,” said Nick Naioti, SVP of Business Development for Persistent. “Our companies have been working together for over a decade, delivering thousands of UGVs to both U.S. and international customers. Now, as part of the Ecosystem alliance, Roboteam will be positioning its platforms as part of the future networked battlefield.”

As Persistent’s longest-standing UGV customer, Roboteam had previously integrated the heritage MPU3 and MPU4 radios into their systems. The company will now be integrating the current-generation MPU5 MANET radio into its ROOK and PROBOT V2 platforms and the SWaP-timized Embedded Module into the MTGR, TIGR and ROCU-7 controller.

Roboteam will also supply Persistent with UGV command-and-control software, to be loaded as Android-based apps on the MPU5 and controlled by the Rugged Display Controller (RDC). All this enables Roboteam to empower the hyper-enabled warfighter with access to voice, video, and sensor data for greater situational awareness.

Both Persistent Systems (Booth No. DE 423) and Roboteam (Booth No. A-358) will be exhibiting their products at the Eurosatory 2022 defense and security trade show, held at the Paris Nord Villepinte Exhibition Center, in Paris, France, on June 13-17.

Roboteam is a leading global provider of tactical ground robotic systems. Based in Israel, Already deployed in more than 25 countries and battle proven through the most challenging missions. Roboteam designs, develops and manufactures cutting edge, user-oriented, multi-purpose, unmanned platforms and controllers for Defense, Law Enforcement and Public Safety missions.  The company created a line of lightweight, fast deployable unmanned ground systems that deliver technological and functional breakthroughs for tactical purposes with unmatched reliability. Among Roboteam’s customers, one can find top units within the US Military, Special Forces, EOD units and SWAT teams as well as other elite units around the globe. Their team includes dozens of highly experienced engineers, dedicated to design robotic systems that provide complete operational and tactical control, overall mission management and enhanced battle management capabilities.