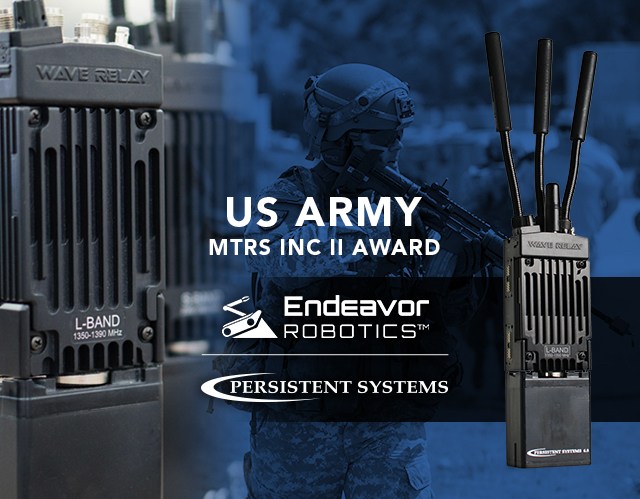 Persistent Systems, LLC (“Persistent”), a leader in Mobile Ad hoc Network (MANET) technology and developers of Wave Relay® and the MPU5 radio, announced they are part of Endeavor Robotics’ winning team for the US Army’s MTRS Inc II Award (Man-Transportable Robotic System Increment II).  This $100 Million contract award has an option for an additional $58 million worth of deliverables to provide a fleet of up to 1,200 mid-sized unmanned ground vehicles (UGVs) to the US Army.  Persistent Systems’ MPU5 is Endeavor’s MANET radio of choice to provide secure and long-range data communication for C2 (command and control), video, CBRNe, and other critical sensor data.

Endeavor Robotics chose Persistent Systems to provide its onboard communications because the MPU5 provides the performance and feature set critical to the UGV’s mission and the US Army’s success:

“We’re extremely proud of our partnership with Endeavor Robotics and congratulate them on this very important award” said Dr. Herbert Rubens, CEO of Persistent Systems. “The US Army has been a long-standing customer of Persistent Systems, and we appreciate the opportunity to deliver potentially 2,400 more MPU5 radios to support this UGV mission, the US warfighter, and the US Army.”

Persistent and Endeavor announced their partnership back in July of 2016 and have been working together since. Tom Frost, President of Endeavor Robotics commented, “Persistent builds a great radio and has been a great partner to Endeavor. We look forward to working together on this Army program.”

The program has been officially awarded to Endeavor Robotics by the US Army’s PEO CS&CSS program office. Low rate initial production should begin in the 2018 / 2019 timeframe.