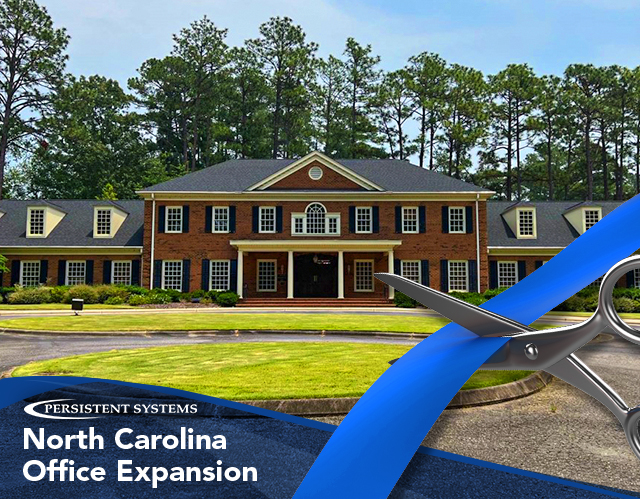 
Expansion will speed up training of Fort Bragg units, provide offsite location for military to collaborate with vendors on integration exercises, and bring high-paying jobs to community

NEW YORK, N.Y.—Persistent Systems (“Persistent”), a leader in mobile ad hoc networking (MANET) technology, announced today the expansion of its office in Pinehurst, North Carolina. The site has now nearly quadrupled in size, allowing for a new training facility and other amenities to support U.S. Special Operations Command (SOCOM) organizations stationed at nearby Fort Bragg as well as benefit the community at large.

“We are very proud of the work we do training troops at Fort Bragg on our MANET equipment, whether part of a Dismounted Kit, on our antennas, or integrated into drones and ground robots,” Shane Flint, Vice President at Persistent, “and this current expansion will greatly expedite that training.”

Previously, training at the site in Pinehurst was conducted a few times a year. Now, with a new training facility and plans to hire a dedicated full-time trainer, Persistent will hold multiple classes a month. In addition, it now has the features, like a catering kitchen, to host major industry events.

“We have the capacity to bring in up to 100 defense contractors for briefings and military-industry integration exercises,” said Dusty Bartlett, Program Manager at Persistent System. “This will be a great boost for our current product users at Fort Bragg as well as for future users across all of SOCOM.”

Impact on the community

In conjunction with the expansion, Persistent plans to hire additional employees to be based in Pinehurst. These will be high-paying technical jobs, with hiring preferences going to veterans. In fact, Persistent has been an enthusiastic supporter of the U.S. Department of Defense’s Skillbridge Program, which helps service personnel transition to private industry.

In addition, the enlarged facilities at Pinehurst mean Persistent will be able to host industry briefings and integration exercises, which translates to a great influx of visitors to the community.

“As Fort Bragg’s Congressman, I appreciate partners in our community like Persistent Systems that support our troops and grow our economy. This expansion is great news for our entire region”, said Congressman Richard Hudson (NC-8), co-chair of the Special Operations Forces Caucus.