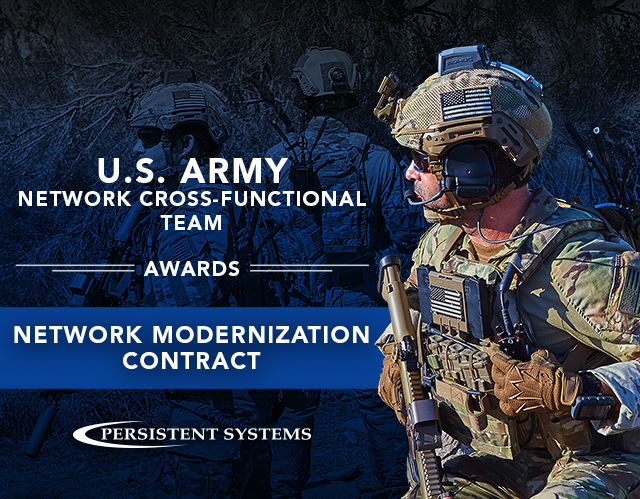 The contract represents a major step by the U.S. Army to modernize their integrated tactical network. The effort consists of a 12-month-long evaluation of Persistent’s MPU5 Networked Radio, which utilizes Wave Relay® mobile ad hoc network (MANET) technology. The MPU5 is designed to provide an extremely scalable, flat, layer-2 network that delivers a seamless and robust network transport down to the dismounted soldier level.

The contract award represents a key example of the Army’s new network modernization acquisition approach, enabling the Army to Buy, Try, and Decide commercial off-the-shelf technologies and determine if they deliver improved capability to our soldiers (or can be adapted to do so). The contract is an Other Transaction Authority (OTA) which enables this acquisition flexibility and speed.

“As a commercial technology company, we are encouraged by the Army’s network modernization approach; specifically, their consideration of commercial technologies and their rapid acquisition strategy,” said Leslie Hulser, Director of Programs for Persistent. “We intend to focus over the next 12 months on delivering a scalable network to connect and empower the soldier with real-time situational awareness. We will also demonstrate automated PACE to provide soldiers with highly reliable communications in contested and congested environments.”

Integrating Persistent’s Wave Relay® MANET into the U.S. Army’s Integrated Tactical Network (ITN) architecture is intended to make the soldier the center of the network. Soldiers in the field will gain improved access to real-time situational awareness enabling informed decision-making and quick action during mission-critical scenarios. “It’s all about empowering the warfighter with robust communication in a fully networked battlefield,” Hulser said.

Under this Network Modernization contract, Persistent will deliver the following:

The Wave Relay® MANET will be deployed across the RF spectrum.

“This demonstration will now give us the opportunity to showcase our tactical networking capabilities to the Army and prove that we are a serious contender for future tactical communication programs,” Hulser said.

Headquartered in New York City since 2007, Persistent Systems, LLC is a global communications technology company that develops and manufactures a patented and secure Mobile Ad hoc Networking (MANET) system: Wave Relay®. Wave Relay® transmits and receives data, video, voice and other applications under the most difficult conditions. Their suite of products is utilized in Commercial, Military, Government, Industrial, Agriculture, Robotics, and Unmanned Systems markets. Please visit https://www.persistentsystems.com to learn more. Follow Persistent Systems on Twitter to get updates on the latest developments @pswaverelay