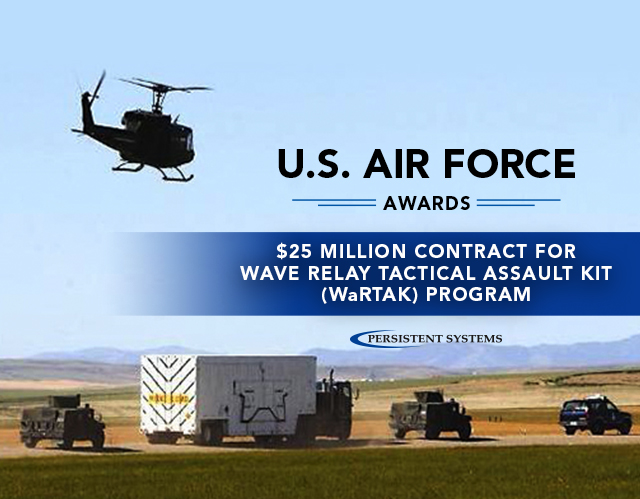 Ground vehicles, support aircraft and individuals using WaRTAK can see, communicate and coordinate with friendly units on TAK, a shared digital map for Android (ATAK) and Windows (WinTAK). They can also identify unknown or enemy vehicles that might prove a threat to strategic mobile Air Force assets via high-definition video or photos.

The WaRTAK program began because of a critical need for Rapid Innovation through the Air Force Research Lab, which Persistent has been supporting for years.

“WaRTAK uses our legacy MPU3 and Gen4 equipment. This hardware has been the backbone of the program, operating in extreme conditions and temperatures.” said Robenhymer. “But it’s time to introduce WaRTAK to the newest generation of gear.”

As part of the four-year contract with the Air Force, Persistent will provide the program with Android-loaded MPU5 smart networking devices and the Dual Push-to-Talk (PTT) system, which allow users to talk on two radio talk groups simultaneously and as an intercom system.

“The scheduled upgrade to Generation 5 hardware will bring a substantial increase in capability and reliability while reducing the size, weight and power on vehicles and dismount users,” Robenhymer said.