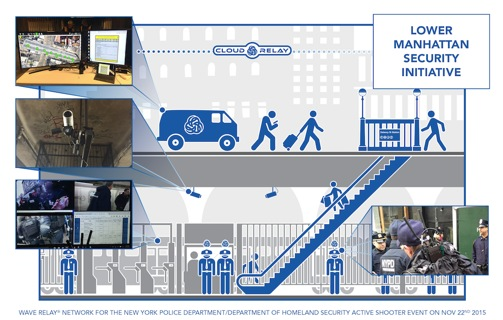 Broadcast on media outlets across the country and discussed on social media channels by Mayor Deblasio, this demo has received national spotlight, but few know the technology that powered this scenario and enabled participants to communicate. The NYC-­‐based company explains:

Persistent Systems LLC provided the network used for the active shooter demo by creating a backbone by which law enforcement and commanders in the scenario could communicate with one another in an inclement environment. In this case, an abandoned subway station – all via Persistent’s secure technology and radios -­‐without reliance on cell phone towers.

HOW WAS WAVE RELAY® USED IN THIS EMERGENCY RESPONSE SCENARIO?

Persistent Systems LLC is grateful to provide its technology to customers in emergency response drills and in real-­‐life scenarios including wildfires, law enforcement and disaster relief across the country and globally. Please visit www.persistentsystems.com to learn more.

To schedule an interview with Persistent Systems, LLC or for media requests, please contact Pulse Creative PR Director: Yanina Erman at yanina@pulse-­creative.com or directly via 917.650.5519.