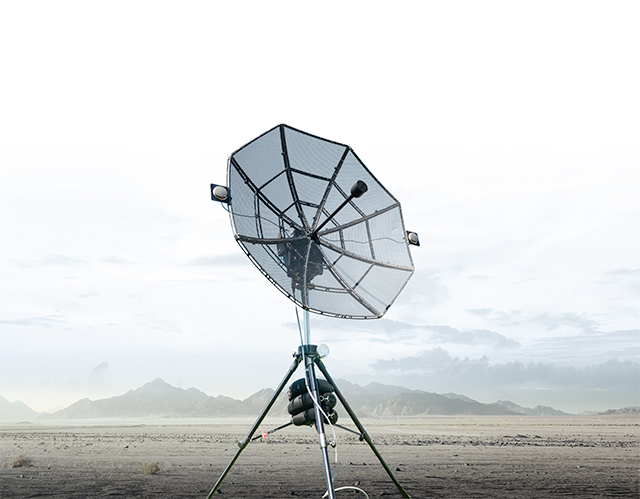 “The Auto-Tracking Antenna System represents a major step towards achieving the vision of a truly networked battlefield,” said Herb Rubens, CEO of Persistent Systems. “The tracking antenna rotates to follow air assets, keeping them connected to the MANET. The air platforms orbit over our users on the ground, extending the MANET bubble and keeping soldiers connected to the enterprise. High throughput, low latency connectivity empowers the warfighter and decreases the dependence on SATCOM, which both reduces cost and increases network availability.”

Designed for ease-of-use, quick assembly, and portability, the Auto-Tracking Antenna System can be assembled and deployed in less than 15 minutes. The portable and lightweight design is completely collapsible, with the main five-foot parabolic dish breaking down into eight individual petals. The entire system fits into most standard-sized SUVs for easy transport and compact storage.

Mimicking the MPU5’s modular RF structure, the Auto-Tracking Antenna System has interchangeable S-Band, L-Band, and C-Band MIMO feeds that allow it to cover all frequencies where Persistent’s five radio modules operate. The antenna feeds twist-lock into place for quick and simple installation. An Automatic Heading System enables the tracking antenna to self-calibrate prior to operation for greater precision and less than one-degree pointing accuracy.

“Our customers require a system that is simple to put together, turn on, and works,” said Louis Sutherland, Vice President of Business Development at Persistent Systems, LLC. “They want to extend the Wave Relay® MANET out to aircraft and achieve high data-rates and reliable HD video transmission. The Auto-Tracking Antenna System truly delivers.” The large parabolic dish enables video streaming out to distances of 130 miles (over 200km) while maintaining high throughput and strong signal strength.

Combining the precisely aimed tracking system with the MPU5 radio and Wave Relay® MANET achieves optimal connectivity and reliable communications for manned and unmanned aircraft to communicate further than ever before.  The antenna is IP67 rated and built to endure harsh environments and weather, so it can be setup and left out for as long as the mission requires.

Persistent is now accepting orders for the Auto-Tracking Antenna System.