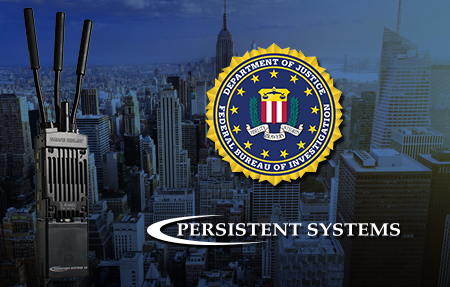 “This IDIQ contract will enable the FBI to deploy our latest MPU5 communication systems,” said Dr. Herbert Rubens, CEO of Persistent Systems. “We are confident that the MPU5 will set a new standard for performance, capability, and features found nowhere else in the industry, and we’re extremely proud to be one of the awardees chosen by the Department of Justice.”
Examples of the performance the MPU5 will provide to support the FBI’s mission:

Dr. Rubens added, “The MPU5’s vast set of capabilities really translates into enhanced situational awareness for the agents, increased mission success, and an overall enhancement in safety. Additionally, the MPU5 provides an extremely cost effective solution for the Bureau by incorporating so much capability into a single commercial item.”

The MPU5 will be available for purchase via the IDIQ contract commencing on June 1st.