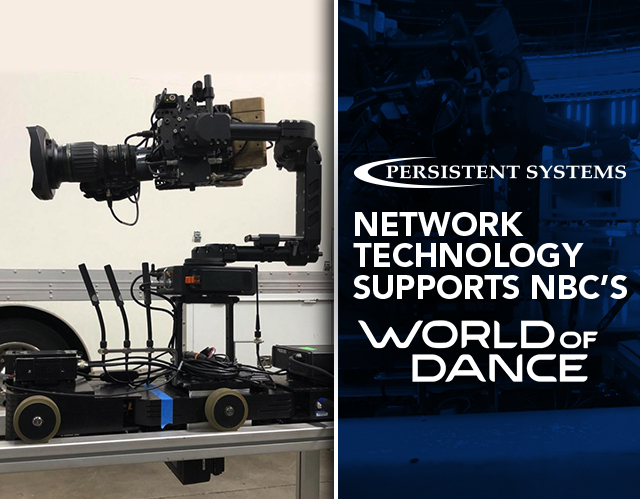 “Our communications technology is already used by federal and military customers as well as unmanned system companies,” Jeffrey Washington, DoD/Media/Entertainment Account Manager for Persistent. “So, it makes sense that, in the world of entertainment, where time is money, you’d also want an extremely robust solution.”

Run off Persistent’s MPU5 computer-loaded network device, the proprietary Wave Relay® MANET allows operators to share voice, HD video, text, and sensor data in a true peer-to-peer fashion, on the move, without the need for fixed infrastructure. In addition, the MANET formed by the MPU5 is self-forming and self-healing, which reduces the risk of signal interruption and information packets being dropped.

The Burbank-based Touring Video team contracted to work on World of Dance used Persistent’s MPU5 smart radios and Wave Relay® MANET to remotely control their gimbaled video cameras. These cameras circled two tracks around the dance stage and operated without a single interruption.

“The remote-controlled gimbals aim the camera and smooth out any unwanted motion as the sled runs the circuit of the track,” said Cordell Webb, project manager at Touring Video. Without a gimbal, the “sled could run over a piece of gaffers tape and make the image jiggle, which would ruin the shot.”

These issues “can quickly become costly for the production,” which is why constant control is so critical. “The MPU5 gives us unmatched confidence in our control & data links,” Webb said.

Touring Video employed four MPU5s on World of Dance. Two MPU5s were co-located with the gimbaled cameras on the moving sleds, while another two were connected to a switch via network cable. All together, they supported a reliable MANET that worked well even in the “RF-noisy, RF-reflective, indoor environment of a modern television soundstage,” Webb said.

Eric Bergez, the Industry Sherpa specialty camera operator and technician contracted by Touring Video, said that the MPU5 was critical to the success of the production and that he planned to use them again in the future. “Considering the nature of live TV, it was imperative that production understood that we have invested in the best possible solution,” Bergez said.