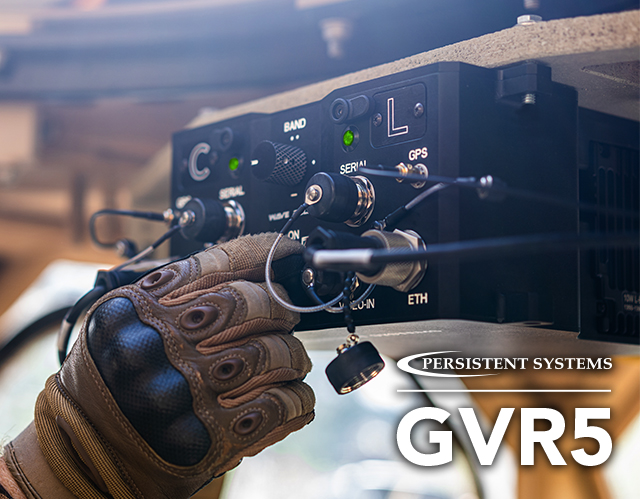 “Like dismounted users, infantry fighting vehicles and similar platforms have a need for a robust, highly scalable MANET,” said Shane Flint, Vice President of Business Development at Persistent, “but that MANET must also fit a special, vehicular environment, which is why we developed the GVR5.”

The GVR5, which can simultaneously operate on two frequency bands (C/L, C/S, or L/S – bands), is specifically designed for integration into infantry fighting vehicles that have unique power systems, ballistic and gunfire shock requirements and operate with complex local area networks found in heavier vehicles. It is hardened to meet the electronic warfare requirements to oppose near-peer adversaries.

The GVR5 is ideal for PACE (Primary, Alternate, Contingency, and Emergency) communications. “It automatically routes communications over the best available band depending on geography and RF congestion,” Flint said, “and by leveraging the vehicle’s intercom system, it routes to tactical voice networks, such as SINCGARS, TACSAT, and HF.”

The GVR5 can also be connected to SATCOM or LTE modems in the vehicle to extend BLOS connectivity to dismounted users – delivering global connectivity to the Wave Relay® MANET.

Dismounted users carrying MPU5 tactical networking devices can wirelessly connect to a vehicle’s intercom system while in or near the vehicle, and send video data to the armored vehicle for the GVR5 to then distribute via the system’s embedded Cloud Relay™ capability, all the way back to TOC or HQ.

“We have already seen serious interest in the GVR5 from major platform integrators and other potential customers,” Flint said.