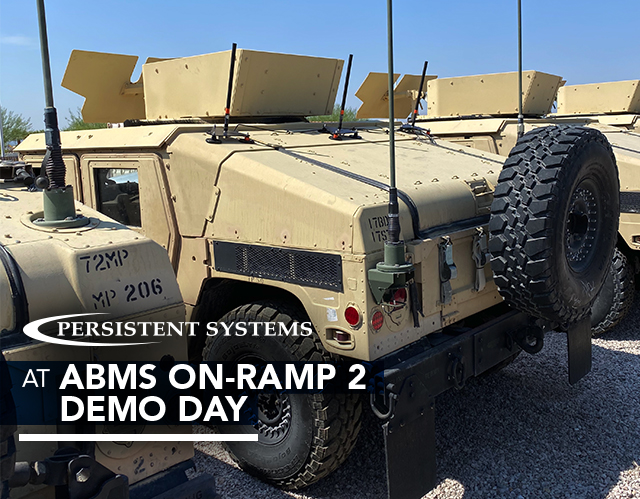 Unlike the traditional platform-centric program with a prime contractor, ABMS brings together dozens of companies in a multi-billion-dollar effort to build a military internet of things. The goal is to connect computers, sensors and shooters at machine-speed, thus fulfilling the U.S. Department of Defense’s vision of Joint All Domain Command and Control (JADC2).

At Nellis AFB, in Nevada, Persistent seamlessly connected strategic convoys with dismounts, sensors, vehicles, and other supporting assets—enabling and defending a mobile command-and-control capability. In doing so, the company leveraged its work with U.S. Global Strike Command and the Air Force Research Lab on the WaRTAK and follow-on ROP programs.

At the White Sands Missile Range, in New Mexico, Persistent used its Cloud Relay™ edge-extension to feed treated sensor data to the Unified Data Library, a cloud-based architecture used to build Common Operating Pictures (COPs). “We also networked other enabling connectivity,” Robenhymer said. “For example, we augmented 5G in austere areas, which is an amazing capability.”

Finally, at Andrews AFB, in Maryland, Persistent helped the various COPs visualize their data for distinguished visitors sitting in on On-Ramp 2 and gave members of the All Domain Operations Center a two-way communications path that ran all the way down to the individual dismount at the edge.

“In all, we were connecting sensor to shooter, connecting vehicles, platforms, people, and data all residing on our scalable, low-latency, high-bandwidth wireless network with room to spare for additional capabilities, such as counter-UAS or controlling drone swarms,” Robenhymer said.