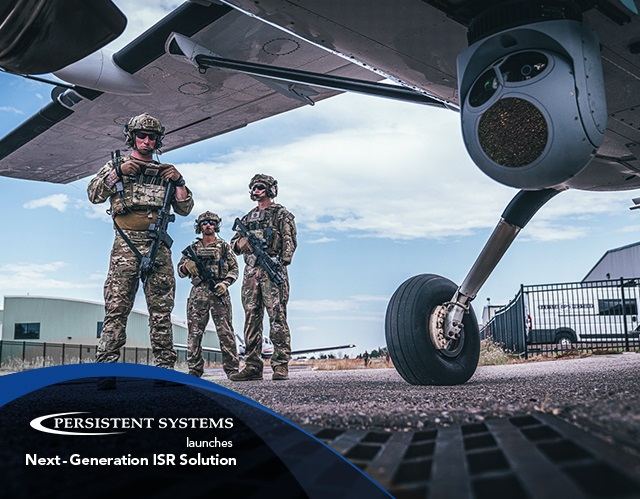 “Currently, troops on the ground are passive recipients of airborne video,” says Christopher Knapp, Director of Business Development at Persistent Systems. “They rely on cumbersome receiver hardware to get video, and even then, the operator with the gear has to be out in the open to watch the feed. All this slows downs operations.”

But with Next-Generation ISR, Persistent has reimagined air-ground video transmission for the networked battlefield.

Now video can be instantly accessible to warfighters, whether they are operating near an aircraft—or at an operations center half-way around the world. Next-Generation ISR also reduces the cognitive load on the soldier and makes mission-critical information available to the entire team.

“When we click on a video on our smartphones, it immediately starts playing. We don’t think about whether we are on Wi-Fi or 5G. With Next-Generation ISR, soldiers can now realize this same convenience on the battlefield,” said Knapp.

By utilizing the Wave Relay® and Cloud Relay™ networks for video transmission, Next-Generation ISR eliminates the need for special receiver equipment. Now a soldier’s MPU5 networking radio is enough. This change both reduces weight and increases capability. Indeed, dismounted users can also talk directly with the sensor operator and control the camera on the aircraft.

Persistent Systems will be demonstrating its Next-Generation ISR capability during the upcoming AUSA Annual Meeting and Exposition, at the company’s exhibitor booth (#4552), at the Walter E. Washington Convention Center, in Washington, D.C. Visitors will get to see how a user of Persistent’s Wave Relay®-powered MANET with Cloud Relay™ can receive video and control cameras from anywhere in the world.

For more information about Persistent’s solutions, visit our website: https://www.persistentsystems.com.