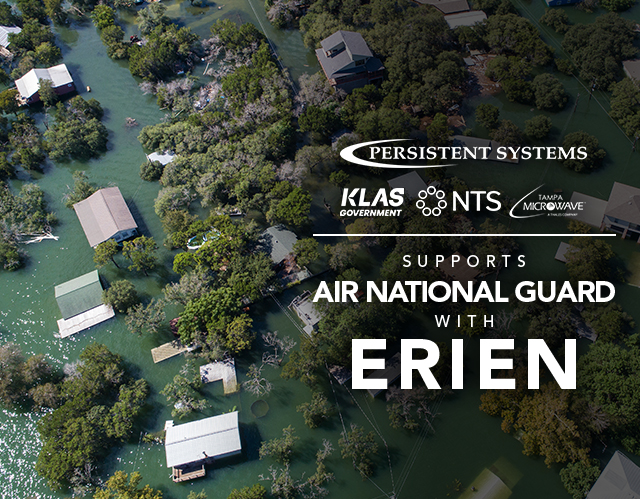 A collaboration with Klas Government, NexTech Solutions and Tampa Microwave, the ERIEN mobile platform provides a complete, unified communications infrastructure in places where such infrastructure is either non-existent—or rendered unusable by, for example, a natural disaster.

“With climate change, we are seeing increasingly powerful and disruptive storms, and with greater frequency,” said Adrien Robenhymer, Persistent Systems VP for Business Development, “So it is critical that state governments and supporting National Guard units prepare for them now.”

The South Carolina demonstration envisioned a scenario in which a powerful hurricane battered Charleston, cutting all cell or Internet service in its wake, and the Air National Guard had to use ERIEN to reestablish internet, radio, video, and chat for state response units.

Typically, when a hurricane is projected to hit South Carolina, a State Emergence Operations Center is activated at the South Carolina Emergency Management Division (SCEMD) in West Columbia. However, this SCEMD is usually swarmed by people and agencies, and as a result, communications suffer.

Anticipating this and the storm damage, the Air National Guard positioned ERIEN—encased in a Voyager TRIK kit developed by Klas Government—at a tactical operations center in Columbia. And NexTech Solutions, the industry integrator for the demo, ensured with its MANTLE automated deployment software, that the kit successfully communicated with the SCEMD via Tampa Microwave satellite terminals, and with field response teams.

“The teams assessing the storm damage had Persistent MPU5 MANET radios,” said Robenhymer. “With them, they could communicate with each other and the tactical operations center—and, by extension, the SCEMD—sharing voice, video, text, and location data.”

Persistent Systems has worked on similar easy-to-deploy communications systems before with the U.S. Air Force, on its Agile Combat Employment concept, and with the Civil Air Patrol, with its Airborne Extensible Relay Over-Horizon Network (or AERONet).

“In fact, the next step for these hurricane readiness demonstrations is to include the Civil Air Patrol with AERONet in the mix to see how robust the system can be,” he said.