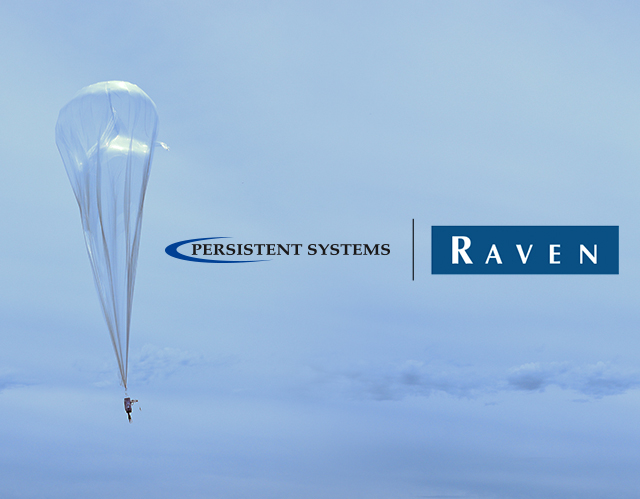 “Utilizing multiple stratospheric balloon systems, users were able to get a long-range network capability in addition to high throughput,” said Scott Wickersham, Division Vice President of Raven Aerostar. “This is a scalable concept which can be extended with both the Raven Lightning and Thunderhead Balloon Systems to include a wide range of ground subscribers well beyond the traditional line-of-sight, point-to-point concept.”

Additionally, Raven Aerostar enhanced Thunderstorm, its command and control software, to seamlessly integrate with the MPU5 Application Programming Interface (API) in order to interact with the balloon systems and payloads. This enables a real-time ability to identify and track the balloons, sensors, and other users in the network using apps like TAK and Google Earth. The network also spanned beyond line-of-sight (BLOS) communications by leveraging Persistent’s Cloud Relay™ solution.

“You could see how this constellation of stratospheric balloons, airborne, and ground-based networking devices—plus tracking antenna—has applications for the recovery of downed pilots and operations in GPS-denied environments,” said Adrien Robenhymer, Vice President of Business Development for Air Force and Intelligence Community at Persistent. “The system can also provide wide-area communication coverage in austere environments, or add intelligence payloads for collaborative and distributed sensing, or do it all at once.”

The MPU5 is a flexible tactical networking solution with multiple RF bands and antenna configurations. Its lower size, weight, and power (SWaP) considerations reduce the need for amplifiers and extra batteries, extending the air endurance of the lighter-than-air platform.

“You can pull in multiple platforms for a private, robust coverage area with different airborne sensors all working in tandem. At the same time, you can also add dozens and dozens of operators on the ground into the same network without it being overworked,” said Robenhymer. “Which opens up a whole realm of new mission possibilities.”

Raven Industries (NASDAQ: RAVN) provides innovative, high-value products and systems that solve great challenges throughout the world. Raven is a leader in precision agriculture, high-performance specialty films, and aerospace and defense solutions, and the company’s groundbreaking work in autonomous systems is unlocking new possibilities in areas like farming, national defense, and scientific research. Since 1956, Raven has designed, produced, and delivered exceptional solutions, earning the company a reputation for innovation, product quality, and unmatched service. For more information, visit https://ravenind.com.