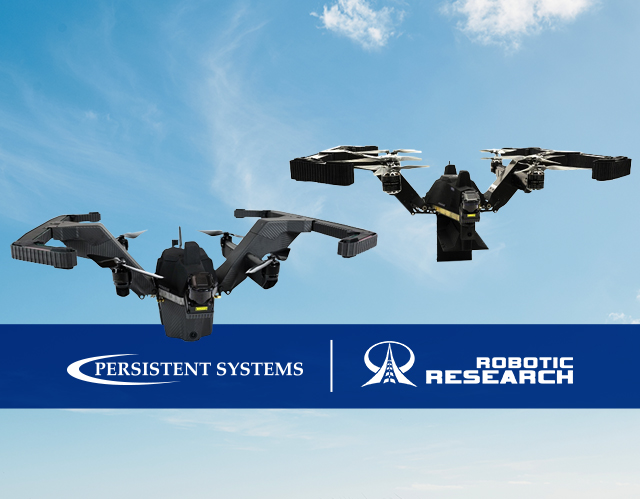 Likewise, Robotic Research plans to includes Persistent technology in its Pegasus IITM, mid-sized, transformable UAS/UGV. It is part of the company’s family of tactically deployable, transformable, autonomous robotic systems that provides all the air capability of a VTOL unmanned aerial system (UAS) in conjunction with the capabilities of an unmanned ground vehicle (UGV).  Robotic Research developed Pegasus for DTRA/CCDC AC in support of specialized missions where the system’s unique sequential use of aerial and ground capabilities extends the reach of the warfighter. Pegasus II demonstrated those capabilities during Project Convergence 20, where it was recognized as one of the most futuristic systems there.

Persistent is positioned to field over 10,000 radios/tactical networking devices to the U.S. Army across five UGV Programs of Record, and it is this leadership in networking unmanned vehicles that makes the collaboration between the two companies so significant.

“Robotic Research is honored to be a provider of autonomous and unmanned products and systems for a wide variety of defense and intelligence customers across the national security spectrum,” said Alberto Lacaze, co-founder and President of Robotic Research. “As a Wave Relay Ecosystem Partner, we can ensure that we are building our systems to be a part of the larger, integrated warfighter network that is taking shape on the battlefield.”

Robotic Research is also the prime autonomy provider of autonomous vehicle technology for the Expedient Leader-Follower program, which enables the platooning of unmanned, autonomous trucks, reducing the number of soldiers being put in harm’s way for many operational mission scenarios. Persistent has been collaborating with Robotic Research on this effort for the past 4 years.

“Robotic Research joining the Ecosystem is a major win for both companies,” Washington said.

Robotic Research, LLC, is an award-winning, leading provider of autonomy and robotic technology driving the transformation of commercial and government autonomous operations through innovative and intelligent systems. Whether providing autonomous vehicles to the military to keep the warfighter safe; delivering unmanned, transformable robots to extend the reach of Special Forces units; or making commercial transportation safer and more efficient, Robotic Research is leading this dynamic revolution in technology. To learn more about Robotic Research, visit rr.ai and follow us on Twitter and LinkedIn.