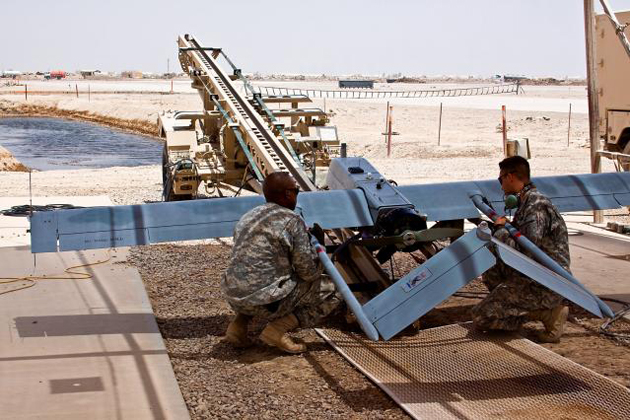 Persistent Systems is integrating a MANET communications capability onto an undisclosed US customer’s UAV for use in ‘swarm’ applications, company officials have revealed.

Speaking to Shephard during a pre-AUVSI briefing, Herb Rubens, CEO of the company, said testing of the ‘Wave Relay’ technology had been conducted in March and explained how integration in preparation for deployment is now underway. ‘The testing went well and the systems are being integrated for follow-on testing of deployment of the system,’ Rubens explained. ‘That particular use case has not been deployed yet.’

He explained the customer’s requirement demanded that multiple UAVs be controlled from a single ground control station (GCS), describing how the operational range of the UAVs exceeded the maximum range of communication from the GCS.

‘So there are basically two options in that scenario: Option one is to SATCOM equip all of the UAVs and operate them over high latency, expensive satellite links,’ Rubens noted. ‘Option number two is to use a mobile ad hoc network system like Wave Relay.

‘It uses the platforms themselves as range extensions. That was the route the customer took, so in this scenarios we had three Class II UAVs, and the first was operating at a distance of around 15nm from the GCS. Each additional UAV was a subsequent 25nm further away, so the UAV at the head of the chain was some 100nm from the control station.’

US Army Class II systems include the RQ-7 Shadow UAV while the US Air Force operators MQ-1 Predators and MQ-9 Reapers in the same category. Persistent Systems would not comment on which particular air frames were being used.

The UAV ‘swarm’ then demonstrated this concept of operations by pushing FMV from all three of the UAVs simultaneously, while also providing C2 for them all, Rubens continued. ‘Their goal is to deploy this summer. This will be the first time that this configuration is deployed. We’ve been doing work with designers on swarm technologies for some five years now, so we can use this on a number of classes of UAVs.’

‘When you enable a network on the battlefield, some of that control can occur at other points in the network,’ Rubens explained. ‘We’ve done capability demonstrations where unmanned ground robots were controlled by a user hopping through a small UAV platform as it was flying overhead of the ground robot. This is the first time these unmanned platforms have been able to communicate with each other.’

Wave Relay also lends itself to dismounted soldier operations, one such example being the receipt of ISR feeds from UAVs.

‘Typically, the problem with that is that only one person can have the specialised ISR receiver for the video,’ Rubens continued. ‘So our system is used as a dismounted soldier solution to connect to existing legacy ISR receivers and then redistribute the video to all of the members of the team, so all of the special forces team can view the video from the ISR platforms without every operator carrying heavy legacy ISR video reception equipment,’ he concluded.