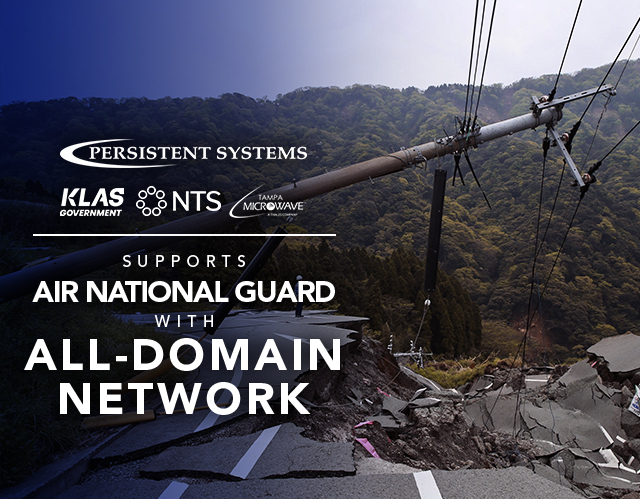 The field demonstration, which was conducted with industry partners Klas Government, NexTech Solutions, and Tampa Microwave for undisclosed state Army and Air Force National Guard units, serves as a follow-up to a tabletop exercise conducted in May.

“We are starting to see—especially those of us living in coastal areas—increasingly powerful storms coming with increasing frequency,” said Adrien Robenhymer, Persistent Systems VP for Business Development, “These storms not only threaten human life; they also take out communications, making it difficult for state governments to coordinate relief efforts.”

That is why backup, field-deployable communications systems are so critical. In the wake of a devastating storm, the All-Domain Network (previously called the Emergency Response Integrated Edge Network) provides a unified communications network to allow National Guard units to establish, or reestablish, internet, radio, video, and messaging capabilities.

The field demonstration, which aimed to prove this out, had the state’s National Guard units set up the All-Domain Network (contained within a Tactical Radio Integration Kit, or TRIK, from Klas Government and supported with the NexTech Solutions MANTLE automated deployment software) at a local base acting as the central Emergency Management Division.

“It was the first time anyone has ever done so in U.S. history,” said Robenhymer, “and it demonstrates the ability of Persistent to deliver an agile and reliable communications capability to operators in austere or emergency conditions.”