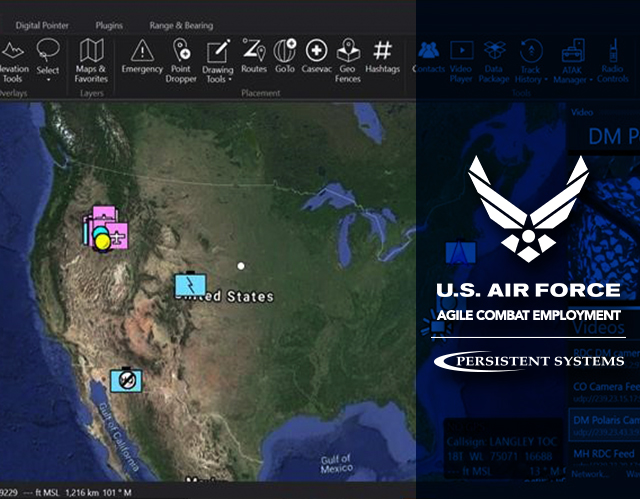 “Normally, you would have hundreds of people on a large Air Force base to support a squadron of fighter jets,” said Todd Grant, Persistent’s Director of Business Development for the Air Force and C4ISR. “With ACE, you get the same capability from a smaller, harder-to-target footprint that moves.”

To accomplish this, the U.S. Air Force requires a highly versatile and mobile command-and-control network that can tie together the core elements a combat wing required to plan missions, maintain jets, put them in the air, and defend the airstrip. An additional goal is to minimize the cost by leveraging existing Air Force assets, such as legacy radios, computer servers, and satellite terminals.

The demonstration proved that the Air Force has the networking capability to support expeditionary air bases in an A2AD environment while saving hundreds of millions of dollars.

Persistent also demonstrated automated PACE (Primary, Alternate, Contingency, and Emergency) communications via satellite, internet, and 5G cellular, as well as by local area network for conditions when a beyond-line-of-sight capability is not available.

“In a world where technologies increasingly depend upon Cloud Computing availability, Persistent’s Base Defense and Missile Field Solutions can operate completely standalone when the Cloud is not available, enabling operation in a ‘CloudNONE’ scenario,” said Robenhymer.

But the implications of the ACE demonstration are even greater than that.

“The interoperability lessons that were learned here flow into the Advanced Battle Management System, the Air Force’s multi-billion-dollar effort to connect computers, sensors and shooters at machine-speed, in keeping with the U.S. Department of Defense’s vision of Joint All Domain Command and Control,” he said.

The next step, Persistent officials say, is to take the real-life capabilities shown with ACE and merge them with future Advanced Battle Management System work.