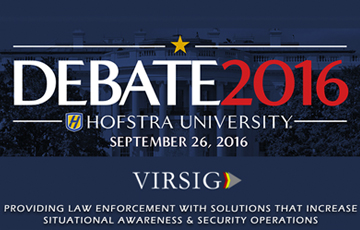 The debate, the first between Hillary Clinton and Donald Trump, is scheduled to take place at Hofstra University in Hempstead, NY on Monday, September 26, 2016. The event has been deemed a National Special Security Event (NSSE) by the U.S. Department of Homeland Security (DHS), as it may be a potential target for terrorism or other criminal activity.

Virsig is teaming with NYC-based Persistent Systems, LLC (“Persistent”); among the specialized equipment they will bring to the event, is Persistent’s Wave Relay® Mobile Ad Hoc Networking (MANET) technology via Persistent’s latest product release, the MPU5. The United States Presidential Debate and other high profile events require a tremendous footprint of sensors, cameras, and advanced security systems designed to detect threats and alert law enforcement. All of these systems require connectivity to unite them with the security personnel who are continuously moving around the venue and its perimeter. The MPU5 provides that high-throughput, fully-mobile connectivity and enables security personnel to stay informed. The Wave Relay® MANET enables real-time threat detection, operational security, and situational awareness, thus empowering authorities to examine and handle the potential threat before it ever becomes a danger to the public.

The MPU5 is proven and fielded by the United States military and federal law enforcement agencies with international and domestic operations. Glenn Taylor, Virsig’s Executive Director, had previously engineered a security technology package for the 2012 Presidential Debate between President Obama & Governor Romney. In regard to the 2016 event, he said: “It’s an honor for Virsig to be able to supply resources such as the MPU5, so law enforcement authorities can best do their job, especially at this event of national significance.”

Persistent Systems’ equipment compliments other proven technologies, including Milestone Systems, Advanced Video Management Software (VMS); a solution favored by law enforcement officials, that was successfully deployed during the previous Presidential Debate in 2012, and will be utilized once again.

While the Presidential Debate is televised over a single evening, it remains a major undertaking, requiring weeks of advanced planning and strategic preparation. Campus Safety Magazine says: “The Hofstra Public Safety Department, which is partnered with the Nassau County and Village of Hempstead Police Departments, will bring in hundreds of additional law enforcement officers and federal agents to assist with security needs.”

Virsig focuses on Network Triplicity, our philosophy of comprehensive security protection for real-time information transport systems, physical storage and archiving of data. They are a state and federal certified Service-Disabled Veteran Owned Business based in New York City. The company was recently honored by being selected by Members of the U.S. House of Representatives, to participate in a Congressional program on technology innovation.